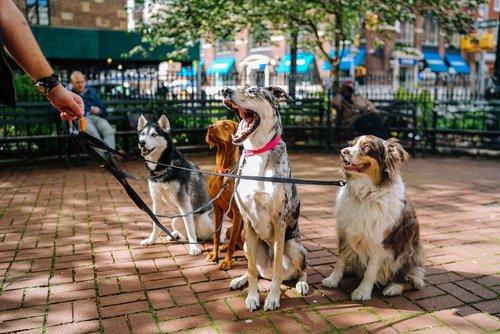 Each year, more than 4.5 million people are bitten by a dog, and more than 800,000 require medical treatment for dog bites in the United States alone according to the US Centers for Disease Control. Children are most likely to be bitten, and they are most vulnerable to severe injuries. Dog bites can cause injuries and infections as well.

No matter what size or type, any dog can bite. Every dog has its own history and behavior. Therefore, it’s important that humans know how to best interact with dogs to avoid any dog bites.

To help avoid a dog bite, it’s crucial to know the animal’s body language. Dogs are amazingly communicative with their bodies.

A dog who is feeling aggressive will make itself bigger by puffing out its fur with ears standing straight. Dogs may also adopt a stiff, straight leg stance. Any of these accompanied by teeth-baring or growling could communicate an oncoming bite.
Anxious

A scared dog might try to be smaller with tail between legs and head low. The dog may expose the stomach or avoid eye contact. Backing away or moving away from a perceived threat means fear, and the dog may bite.

When an unfamiliar dog approaches, stay still. This will keep the dog from startling, and it will help you to not be perceived as a threat.

Always Ask for Permission to Pet

If you’re out walking and you see a cute dog, never pet the dog without asking the owner if it’s okay. Some dogs are not friendly with strangers.

Never Run from a Dog

Running from a dog will only encourage it to chase you. Do not make yourself a target for it to chase.

Dogs use their sense of smell when interacting with each other and humans. Don’t touch the dog until it’s had a chance to smell and accept you.

While most domesticated dogs would normally not hurt one of its humans, accidents do happen. The risk can be lessened, though, if children and dogs are supervised during play.

Keep Your Body Turned to the Side

Direct eye contact or facing a dog can appear aggressive. Therefore, turn your body to the side to prevent alarming the dog.
If you are bitten or attacked by a dog, you can protect yourself by placing something between yourself and the dog such as a bag or purse. If the dog knocks you to the ground, curl into a ball with your head tucked in and your hands of your ears and neck.

After you’ve been bitten or attacked by a dog, be sure to report the bite to the local animal control agency of the police department, especially if you’re unsure about the dog’s medical history and whether or not it’s been vaccinated against rabies.
Dog bites can mean more than just rabies, though. In fact, over 60 different kinds of bacteria have been found in dog mouths. People who suffer a dog bite may be infected by Capnocytophaga bacteria, Pasteurella External, Tetanus, or MRSA.

If you are a victim of a dog bit despite doing your best to avoid dog bites, you may have some legal options available to you as you heal. Speak with a lawyer today by emailing office@carrilloinjurylaw.com.